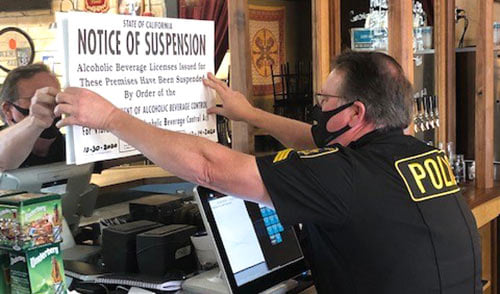 GRASS VALLEY - On October 30, 2020, agents of the California Department of Alcoholic Beverage Control (ABC) posted a Notice of Suspension at the 1849 Brewing Company on Sutton Way in Grass Valley for operating a disorderly premises. Alcohol sales at the premises were immediately prohibited and will not be allowed for the 45 days.

The suspension is the result of an investigation conducted by ABC agents with assistance from the Grass Valley Police Department related to disorderly activity as defined by California Business and Professions Code Section 25601.

ABC filed an accusation against the business and accused it of operating a disorderly premises because of numerous calls for service between May 27, 2019 and September 30, 2020 to address reported crimes at the location such as public drunkenness, fights, assaults, reports of illegal drugs, and public urination. The location is also accused of violating noise conditions on its premises, thus affecting the nearby neighborhood.

The owners of 1849 Brewing Company signed a stipulation and waiver agreement and have accepted ABC’s penalty of a 45-day suspension.

“ABC licensees whose business results in calls for service to local law enforcement departments put a drain on community resources,” said California Statewide Law Enforcement Association (CSLEA) President Alan Barcelona.  “They contribute to a decline in atmosphere, safety, and quality of life for neighbors.  Thank you to the ABC agents and Grass Valley police officers who investigated this business and worked to address community concerns.”