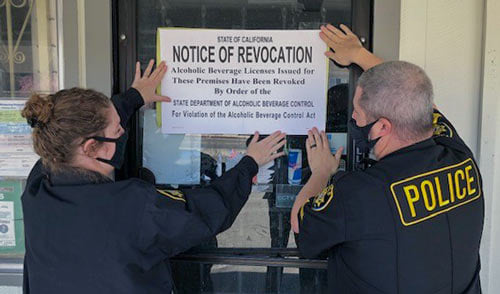 While M and M Liquor suffered a hard revocation, Gavilan Market’s license was revoked, with the revocation stayed for one full year to allow for an ownership transfer approved by the ABC. Meanwhile, that license is immediately suspended for 45 days and indefinitely for up to one year, and alcohol sales are prohibited at both locations.

These ABC license revocations come after a joint investigation by ABC and the Santa Clara County District Attorney’s Office, Bureau of Investigation revealed labor human trafficking.  The investigation took place over several months and led to the arrests last year of the ABC licensees, 66-year-old Balwinder Singh Mann and his wife, 66-year-old Amarjit Mann. The investigation found that the Mann’s allegedly harbored at least one victim in the back of the M and M Liquor store where the individual slept on a mattress in unhealthy conditions.

“The accusations of labor human trafficking are despicable, and I thank ABC agents for their investigation along with the Santa Clara County District Attorney’s Office,” said California Statewide Law Enforcement Association (CSLEA) President Alan Barcelona.  “This alleged crime was discovered by alert ABC agents who were conducting an inspection of the store and recognized the signs of human trafficking.”

According to the District Attorney’s office, in late February 2020, a California Alcoholic Beverage Control (ABC) inspection discovered the victim at M&M Liquors. ABC agents contacted a man who appeared to be living in a small storage room in the back area of the store – a major red flag for human trafficking. Agents noted a thin mattress lying over milk crates, an office desk contained folded clothes in each drawer. On top of the desk there were pots and pans for cooking and next to the desk, there was a mop sink with a faucet approximately three feet off the ground and a shampoo bottle. Investigators later learned the victim was bathing from the mop sink.