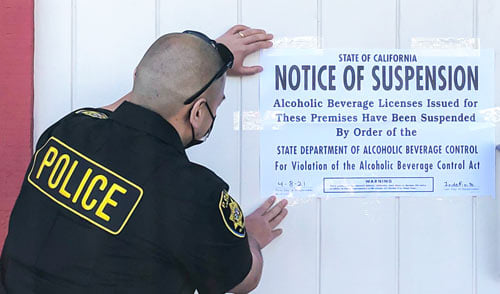 VALLEJO -  On April 13, 2021, the California Department of Alcoholic Beverage Control (ABC) announced it has revoked the license of Kesler’s Lounge in Vallejo. The revocation is stayed for 180 days to allow for an ownership transfer approved by the Department. ABC Agents posted a public notice at Kesler’s Lounge on April 8 that the license is indefinitely suspended. Alcohol sales are immediately prohibited until the license transfers.

ABC revoked the license based on complaints of illegal sales of narcotics at Kesler’s Lounge. After receiving complaints, ABC agents initiated an investigation spanning nearly five months. During the investigation, undercover agents were able to purchase suspected methamphetamine from employees and patrons during multiple visits to the licensed premises.

“California ABC agents work undercover to determine if illegal activity is taking place inside bars, restaurants, and stores and venues that serve and or sell alcohol,” said California Statewide Law Enforcement Association (CSLEA) President Alan Barcelona.  “Their jobs often put them at risk and they work long hours during the day and night and weekends.  Their law enforcement work helps to keep all of us safe, on the roads, in our neighborhoods and in our communities.”

The investigation concluded with the arrest of an employee and patron who were suspected of the sale of illegal narcotics. Based on the numerous violations discovered during the Department’s investigation, ABC filed an administrative accusation against the licensee.

The licensee agreed to a settlement offer and the license will be suspended indefinitely until it is transferred. If the terms of the Department’s decision are not met, the ABC license will be revoked.