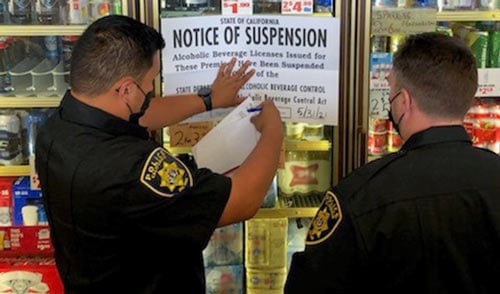 FRESNO– On May 6, 2021, California Department of Alcoholic Beverage Control (ABC) agents posted a 25-day Notice of Suspension at Quick-N-Shop Liquor located at 1240 West Shields Avenue in Fresno. The liquor store allegedly furnished alcohol to a person under the age of 21 who was later involved in a deadly DUI solo-car crash that killed the 18-year-old driver and seriously injured a 17-year-old passenger. Quick-N-Shop Liquor is immediately prohibited from selling alcohol until the suspension concludes on May 31, 2021.

“We can’t press strongly enough, the need for those who sell/serve alcohol to check IDs,” said California Statewide Law Enforcement Association (CSLEA) President Alan Barcelona.  “It’s the very first step in preventing tragedy down the road.  Thank you to the ABC agents who investigated this accident and traced back where the underage DUI driver purchased alcohol”

The suspension of the ABC license at Quick-N-Shop Liquor follows a Target Responsibility for Alcohol Connected Emergencies (TRACE) investigation.

Through the TRACE program, ABC agents investigated the DUI crash in May 2020. ABC Agents examined the vehicle and other evidence as well as interviewed several witnesses to identify where the underage driver obtained alcohol. The fatal single-car crash occurred early in the morning on May 22, 2020. ABC Agents determined that a Quick-N-Shop Liquor employee furnished alcohol to the minor at the store prior to the crash.

The TRACE program is made possible by a grant from the California Office of Traffic Safety through the National Highway Traffic Safety Administration. The grant provides funding for in-depth ABC investigations of serious incidents involving alcohol and minors, including car crashes.