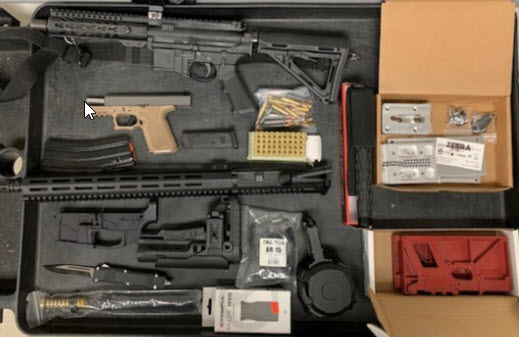 SAN BERNARDINO — On March 28, 2022, California Attorney General Rob Bonta announced the arrest of, and charges filed against, a San Bernardino man found in possession of illegal firearms and ammunition, despite being previously convicted of a felony and banned from owning firearms. The individual was on parole after serving a sentence of 32-years to life for a violent felony and is prohibited from owning and possessing firearms and ammunition.

According to the California Department of Justice, DOJ Bureau of Firearms special agents observed the suspect purchasing an AR-15 style ghost gun kit at a San Bernardino gun show. After obtaining a search warrant, agents located the illegal weapons and ammunition at the suspect’s home.

“Across California, we are working day in and day out to make our communities safer,” said Attorney General Bonta. “Whether it is a widespread APPS sweep, cross-referencing gun purchases in individual cases, or conducting undercover work, these strategies are critical to preventing gun violence in California. I am grateful for the efforts of our hard-working DOJ Special Agents whose work resulted in the charges we are announcing today.”

A copy of the complaint can be found here.