“These types of joint operations targeting gangs and their violent illegal activity help to make communities safer and work to remove firearms from dangerous individuals.  Thank you to the law enforcement special agents and officers who worked on this investigation for months in order to protect the public.” – CSLEA President Alan Barcelona 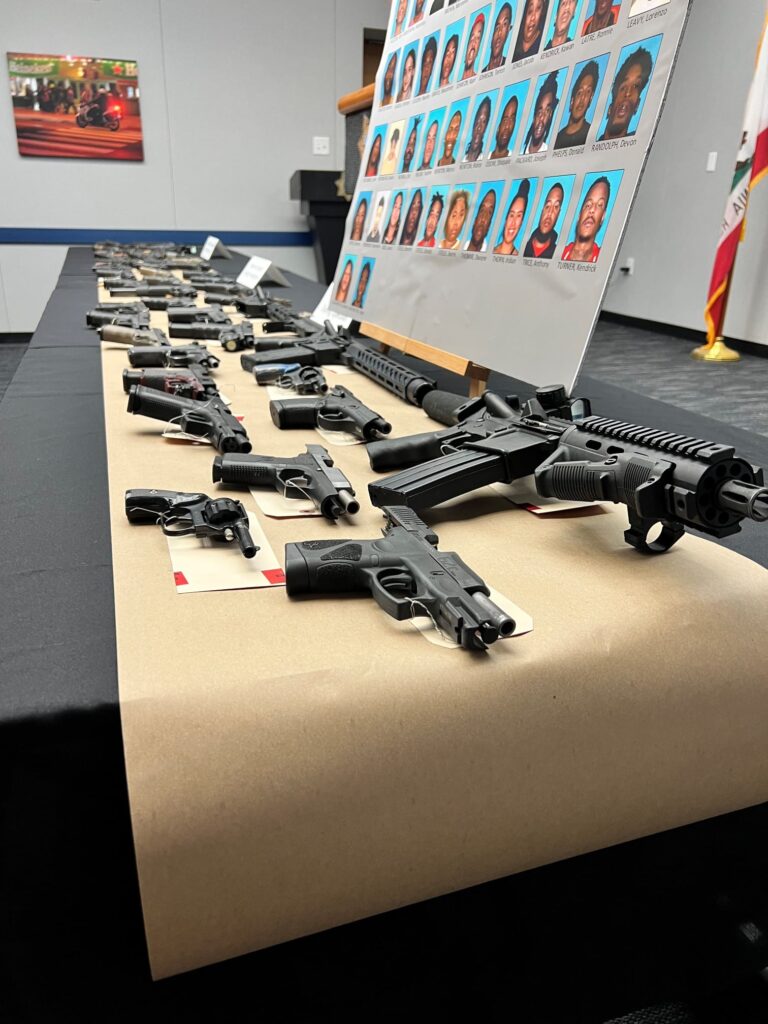 The investigation was conducted as part of a cooperative effort through the Fresno-area Multi-Agency Gang Enforcement Consortium (MAGEC). Members and associates of the gangs are allegedly responsible for a series of violent crimes, including homicide, and were identified by the Fresno Police Department as a significant threat to the community. In addition to the arrests, the joint law enforcement effort, which, on April 14,  culminated in a large-scale operation with agents executing 38 search warrants, also resulted in the seizure of 30 firearms and $18,960 in U.S. currency.

“Today, Fresno is safer thanks to collaboration, determination, and swift action,” said Attorney General Rob Bonta. “No family should ever have to worry about drive-bys or other forms of gun violence in the neighborhoods where their children live and play. As a result of this joint law enforcement effort, we’re taking guns off the street and putting suspected gang members and their associates behind bars. Together, we’re putting public safety first. Thank you to our partners in Fresno and across the state for working with us day-in and day-out to protect the people of California.”

“This operation is the largest of its kind in recent history in our state,” said Fresno Police Chief Paco Balderrama. “It has yielded multiple arrests of violent felons, taken many illegal firearms off our streets, helped solve at least three homicides, and stopped half a dozen anticipated shootings that we are aware of, including two potential mass shootings. Strong partnership and collaboration with our state and federal partners are necessary to succeed in bringing safety to our communities. We know all too well the violence affecting our city, and what must be done to turn the tide and increase community safety. We thank the California Department of Justice and state partners, our federal partners, and our local law enforcement agencies for playing such a critical role in the success of this operation, but the ultimate credit goes to the faithful men and women who have put in countless hours on this operation by doing this difficult work. Today is your day, and our community is safer for it.”

Over the course of the investigation, law enforcement officers were able to help prevent numerous violent crimes, including attempted murder, assault with a deadly weapon, and other firearm-related crimes. In addition, the operation yielded new evidence to support the arrests of individuals allegedly responsible for six previously unsolved murders and separately the investigation also resulted in at least 14 arrests for conspiracy to commit murder. Suspected gang members also allegedly helped fund their activities through sex trafficking and prostitution rings, which initial estimates suggest brought in tens of thousands of dollars a week. During the joint law enforcement operation, agents also offered services to potential victims in conjunction with local service providers. In addition to human trafficking, suspected gang members allegedly committed various other crimes, including murder, attempted murder, assault, conspiracy, illegal possession of a firearm, pimping and pandering, burglary, and more.

The arrests were the result of a joint investigation and subsequent operation by the California Department of Justice’s Special Operations Unit, Fresno Police Department, Fresno County District Attorney’s Office, MAGEC, Fresno County Sheriff's Office, California Highway Patrol, Federal Bureau of Investigation, and the U.S. Attorney's Office for the Eastern District of California, as well as numerous other law enforcement agencies who assisted in the operation. Through collaboration, the California Department of Justice’s Special Operations Unit provides statewide enforcement for combating violent career criminals, gangs, and organized crime groups, as well as intrastate drug trafficking. The unit uses the latest technology and advanced investigative techniques to work alongside local law enforcement to enhance investigations into violent criminals and organized crime throughout the state.