“I am sure the residents of Fresno are extremely grateful for the work done in this months-long joint operation which targeted gangs and their violent illegal activity. This type of law enforcement work helsp to make communities safer and works to remove firearms from dangerous individuals.  Thank you to the law enforcement special agents and officers who worked on this investigation for months in order to protect the public.” – CSLEA President Alan Barcelona 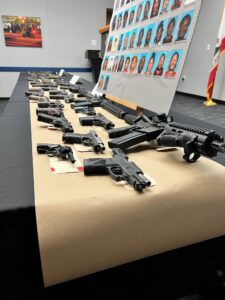 FRESNO - On April 28, 2022, a federal grand jury returned four indictments against six Fresno residents as a result of Operation No Fly Zone, an investigation that worked to combat a rise in the number of shootings and homicides in Fresno.

The multi-agency, months-long investigation resulted in the arrests of more than 40 individuals, including six federal defendants.

According to court documents, on March 16, 2022, investigators gained information that Newton and Feaster would be meeting at a residence in Fresno so that Newton could provide Feaster with a firearm and an extended magazine. Investigators observed the meetup, and shortly after Feaster left the residence, officers attempted to conduct a traffic stop on Feaster’s car. Feaster failed to yield, bailed out of the car with a bag, and fled on foot. After a chase, officers arrested Feaster and seized the bag from him. Inside the bag, officers found a semi-automatic handgun with an extended magazine.

On March 18, 2022, investigators learned about the presence of a firearm inside a car in which Phelps was a passenger. Officers conducted a traffic stop on the car, and during a search of the car, under the seat where Phelps had been sitting, officers found a loaded, privately manufactured, semi-automatic handgun with no serial number.

On March 23, 2022, investigators received information that Cannon was in possession of a firearm at the Fashion Fair Mall. Officers reported to the mall, where they found Cannon, a parolee, and conducted a parole-compliance check on him. During a search of his person, officers found a loaded semi-automatic firearm with an extended magazine attached.

These cases are the product of an investigation by the

If convicted, the defendants each face a maximum statutory penalty of 10 years in prison and a $250,000 fine. The charges are allegations; each defendant is presumed innocent until and unless proven guilty beyond a reasonable doubt.