“ABC licensees have a responsibility to the community in which they operate, to conduct business in an orderly way and not contribute to unsafe situations that put people at risk.  ABC agents work days, nights and weekends to ensure the public’s safety and that licensees are following ABC regulations.” – CSLEA President Alan Barcelona 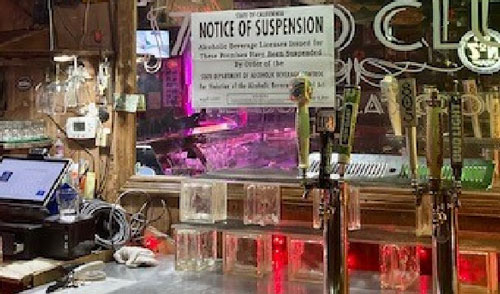 CITRUS HEIGHTS – On August 16, 2022, the California Department of Alcoholic Beverage Control (ABC) announced the liquor license suspension at Rocky’s 7440 Club located at 7440 Auburn Boulevard in Citrus Heights. Alcohol sales were immediately prohibited for 30 days and will not be allowed until the suspension has concluded.

ABC agents opened an investigation after receiving complaints from the community and the Citrus Heights Police Department. For more than a year, the Citrus Heights Police Department responded numerous times after receiving reports of DUI, public intoxication, fights, battery, theft, and assault with a firearm at Rocky’s 7440 Club. ABC found that Rocky’s was operating as a disorderly premises.

According to ABC, the owner of the premises recently signed a settlement which includes the 30-day suspension as well as new operating conditions on the license which will require restrictions on outdoor service of alcohol, live entertainment, and the hours during which the premises can serve alcoholic beverages. The club must also provide two uniformed security guards on site whenever there is live entertainment. Additionally, if similar violations continue to occur at the premises at any time during the next three years, ABC has authority to revoke the license.

“ABC is committed to keeping communities safe,” said ABC Director Eric Hirata. “We applaud the efforts of the Citrus Heights Police Department for their help with this investigation.”