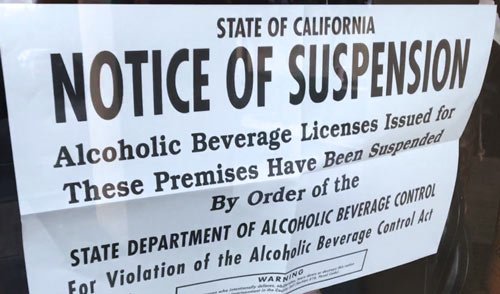 REDDING – On August 5, 2022, the California Department of Alcoholic Beverage Control (ABC) announced that it will post a 60-day suspension at Shameless O’Leery’s Irish Pub located at 1701 California Street #B in Redding. Alcohol sales will be prohibited beginning August 22 and will not be allowed until the 60-day suspension has concluded.

ABC agents opened an investigation after receiving complaints from the community and the Redding Police Department. ABC found that Shameless O’Leery’s Irish Pub was operating as a disorderly premises and had become a drain on local law enforcement.

According to the Redding Police Department (RPD), between February 2021 and May 2022, RPD officers responded to 125 calls for service at or near Shameless O’Leary’s Irish Pub. These calls for service included a shooting, multiple fights, vandalism, resisting/obstructing peace officers and others. RPD expressed appreciation for its law enforcement partners at California ABC for their assistance resolving this public safety issue.

“ABC licensees have a responsibility to uphold the terms of their ABC license and to not be a drain on public or emergency response services.  They should add something to their community, not take away from it,” said California Statewide Law Enforcement Association (CSLEA) President Alan Barcelona.

The owner of the premises recently signed a settlement which includes the 60-day suspension as well as new operating conditions on the license which will require the presence of uniformed security guards during certain hours at the premises while also restricting live entertainment and the hours in which the premises can serve alcoholic beverages. Additionally, if similar violations continue to occur at the premises, ABC has authority to revoke the license.