“Retrieving firearms from people who are prohibited by law from possessing them is dangerous work for law enforcement officers, but removing weapons from those who, by law, are not allowed to have them, increases public safety.  We thank the brave special agents and law enforcement officers who risk their lives for the safety of others.” – CSLEA President Alan Barcelona 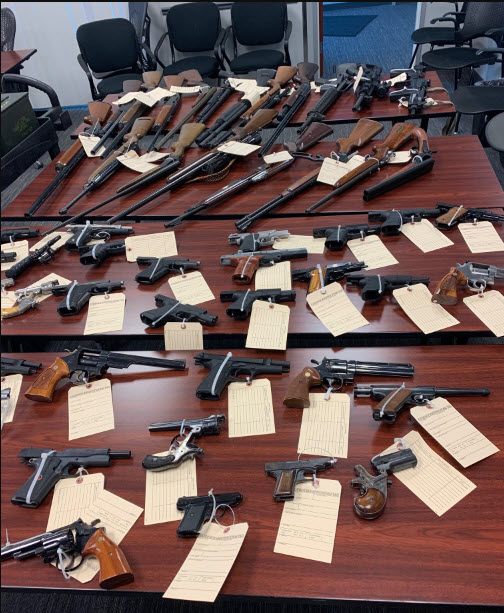 RIVERSIDE — On August 18, 2022, California Attorney General Rob Bonta announced that California Department of Justice (DOJ) special agents seized dozens of guns, including assault weapons, and thousands of rounds of ammunition from two individuals in Riverside County, one of whom was prohibited from possessing firearms.

California DOJ special agents initially went to the home of the individuals — both of whom are seniors — to allow the prohibited person to turn over his weapons, magazines, and ammunition voluntarily. However, the prohibited person and his spouse refused entry and were uncooperative. As a result, DOJ and the Menifee Police Department executed a search warrant to recover the weapons. Upon entry, they found:

Three of the weapons were loaded, located in plain sight, and were not locked in a safe that would be inaccessible to the prohibited person.

“Keeping our communities safe and removing firearms from individuals found too dangerous to possess them is a top priority for my office,” said Attorney General Bonta. “These individuals may pose an increased risk to themselves and others — especially if they have access to a dangerous firearm. I implore Californians to take the necessary steps to protect themselves and others to ensure those who can no longer responsibly possess a firearm do not have access to one. Please do not feel guilty or hesitant to reach out to local law enforcement for assistance should you need it.”