California AG Announces the Seizure of Millions of Fentanyl Pills Since April 2021 Addressing the opioid crisis through ongoing enforcement, litigation, and prevention efforts 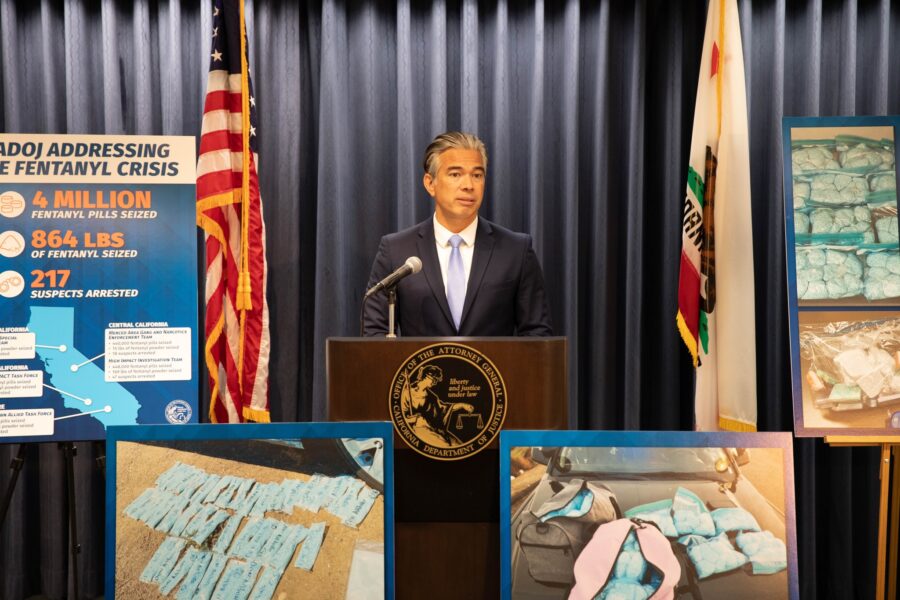 LOS ANGELES — On October 12, 2022, California Attorney General Rob Bonta provided an update on the California Department of Justice’s (DOJ) ongoing work to address the fentanyl crisis, including the seizure of more than 4 million fentanyl pills and nearly 900 pounds of fentanyl powder, and more than 200 arrests through the DOJ’s Bureau of Investigation and work with allied task forces throughout California since April 2021.

In addition, Attorney General Bonta continues advancing public policy and working with national partners to hold the opioid industry accountable for their role in creating the opioid crisis and its impacts. To date, the California Department of Justice has secured more than $32 billion through nationwide settlements, including $2 billion for California, bringing needed funding back to communities for treatment and prevention strategies.

“Throughout the nation, we continue to address the impacts of the opioid crisis, and have in recent years seen a marked increase in fentanyl use and associated deaths,” said Attorney General Bonta. “This crisis is a multifaceted public health and safety issue — and addressing this crisis requires a thoughtful and strategic approach. Whether through the seizure of illicit fentanyl through our ongoing enforcement efforts or by bringing California billions of dollars through our lawsuits and investigative efforts to hold the opioid industry accountable, the California Department of Justice is all-in when it comes to protecting California families from the dangers of fentanyl. I want to thank our teams and our law enforcement partners across the state for their work in taking fentanyl off our streets and out of Californian communities. There are countless lives being saved as a result of their important and difficult work.”

Fentanyl is a powerful and potentially addictive synthetic opioid that is up to 50 times stronger than heroin. A small amount of fentanyl, just two milligrams, can result in overdose and potentially death. Fentanyl can be found in different forms, including pills, powder, and liquid, and is produced legally through the legal pharmaceutical market and illegally through the illicit drug market. Illicit fentanyl has been found in many drugs, including heroin, methamphetamine, counterfeit pills, and cocaine. Fentanyl mixed with any drug increases the likelihood of a fatal overdose. Illicit fentanyl has also reportedly been produced in rainbow colors, potentially aimed at increasing consumption among users, especially young adults.

Through the Fentanyl Enforcement Program, DOJ works with local and federal law enforcement partners throughout the state. In 2022-2023 budget year, DOJ secured $7.9 million for the creation of the program within DOJ under coordination of the Bureau of Investigation to expand this important work, with an allocation of $6.7 million in ongoing funding. This funding is in addition to DOJ's ongoing efforts through its Bureau of Forensic Services, which, among other things, supports law enforcement across the state by directly screening for and quantifying the amount of fentanyl present in drug offense-related samples submitted to DOJ.

Since April 2021, DOJ allied task forces throughout the state have aggressively and strategically worked to detect, deter, disrupt, and dismantle fentanyl operations and criminal enterprises, supply chain networks, and other associated criminal syndicates to prevent fentanyl from reaching California neighborhoods and communities and help those directly impacted by this public health crisis. This work has touched many communities including:

The opioid crisis stems from an increase in prescription opioids and illegal practices by opioid manufacturers and sellers who misled healthcare providers and patients about the addictive nature of opioids, contributed to an over-supply of opioids in the market, and helped create the crisis the country faces today. Through ongoing litigation and investigative efforts, DOJ seeks to hold opioid manufacturers and distributors who are alleged to have fueled the crisis to account, and to bring funding and relief to affected communities nationwide, including:

Through nationwide settlements, Attorney General Bonta and other state attorneys general have sought strong monetary relief and injunctive terms to help address and mitigate the impacts of the opioid crisis. The terms of the settlements, including requirements for funding received by states, outline high-impact abatement activities and strategies such as: