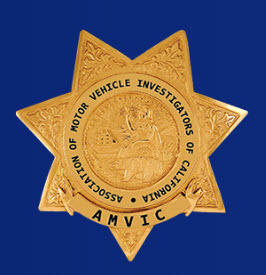 The Association of Motor Vehicle Investigators of California (AMVIC) will begin the election process for two positions on the board of directors, President and Treasurer. Only active AMVIC members from rank and file in good standing for a minimum of three consecutive years can serve as a director.

Each elected position will serve for a two-year term unless otherwise vacated prior to completion. Directors are required to attend all meetings on their own time, in the evenings or on the weekend.

The nomination process will begin on Monday, November 28, 2022, and conclude on Friday, December 2, 2022. AMVIC members should email AMVIC Vice President at Leonard.mata@dmv.ca.gov to nominate a member during the nomination period, and potential candidates may self-nominate. Nominated members are required to confirm their willingness to serve on the board. All candidates are encouraged to submit a Statement of Qualifications no longer than one page to be included on the ballot.

Voting will be conducted electronically, and all ballots will be certified and counted at the California Statewide Law Enforcement Association (CSLEA) Headquarters by CSLEA staff. The candidate with the most votes for each position will begin their term of office on the AMVIC Board of Directors upon completing the ballot count.

For the benefit of potential candidates, AMVIC was established in 1959 as a nonprofit mutual benefit corporation to promote the membership's economic and professional interests and working conditions. AMVIC is comprised of a four-person board of directors elected by its members. Each director serves as a volunteer, primarily on their own time, outside of work, and receives no compensation for their efforts. AMVIC has no employees or offices and utilizes CSLEA Headquarters staff and facilities to conduct official business.

AMVIC is one of 18 affiliated associations that comprise the CSLEA Board of Directors. CSLEA is the sole representative of the employees within the California State Employee Bargaining Unit 7. AMVIC represents all dues-paying rank-and-file investigators and special investigator assistants within the Department of Motor Vehicles. AMVIC is not autonomous of CSLEA in collective barging or legal representation. AMVIC's political endorsements and legislative proposals are done with and through CSLEA's various committees.

If you have any questions, do not hesitate to contact AMVIC President Kenneth Ehrman at amvic.pres@gmail.com.