CSLEA Board of Directors Meeting – January 13, 2010 Directors conclude meeting with a trip to the Capitol and visit with Governor Newsom 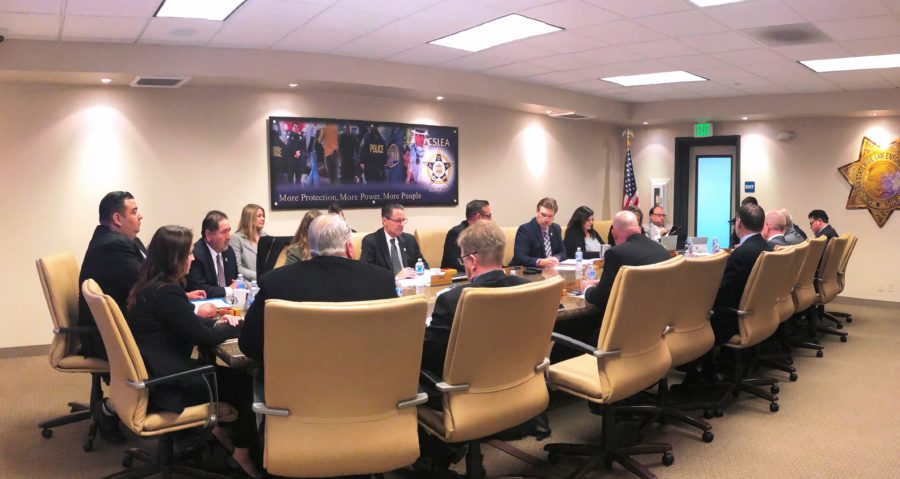 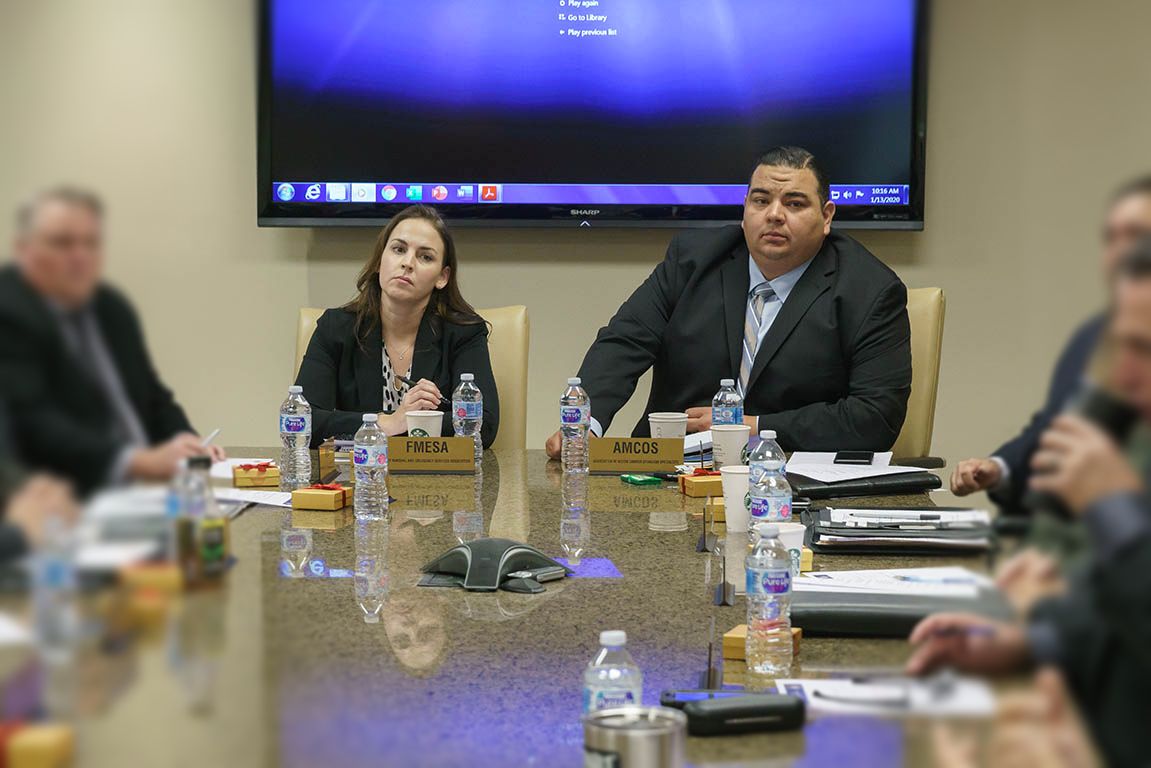 “As the new president of AMCOS, this was my initial exposure to the CSLEA Board.  I was impressed with the amount of information presented and explained,” said Bustos.  “I was particularly impressed with the PAC/Leg presentation.  It is beneficial to learn the intricacies of the upcoming assembly and senate bills.”

The Board received updates from CSLEA Political Consultant Peter Mitchell and Legislative Advocate Shane LaVigne.  Mitchell reviewed the political climate in California and the country and discussed issues that could impact future elections including housing, homelessness, criminal justice and the economy.  Mitchell praised CSLEA directors for political decision making and strength at the Capitol.

Legislative Advocate LaVigne updated directors on activities in the Legislature, the release of the State budget, the bill introduction deadline and possible trailer bills. 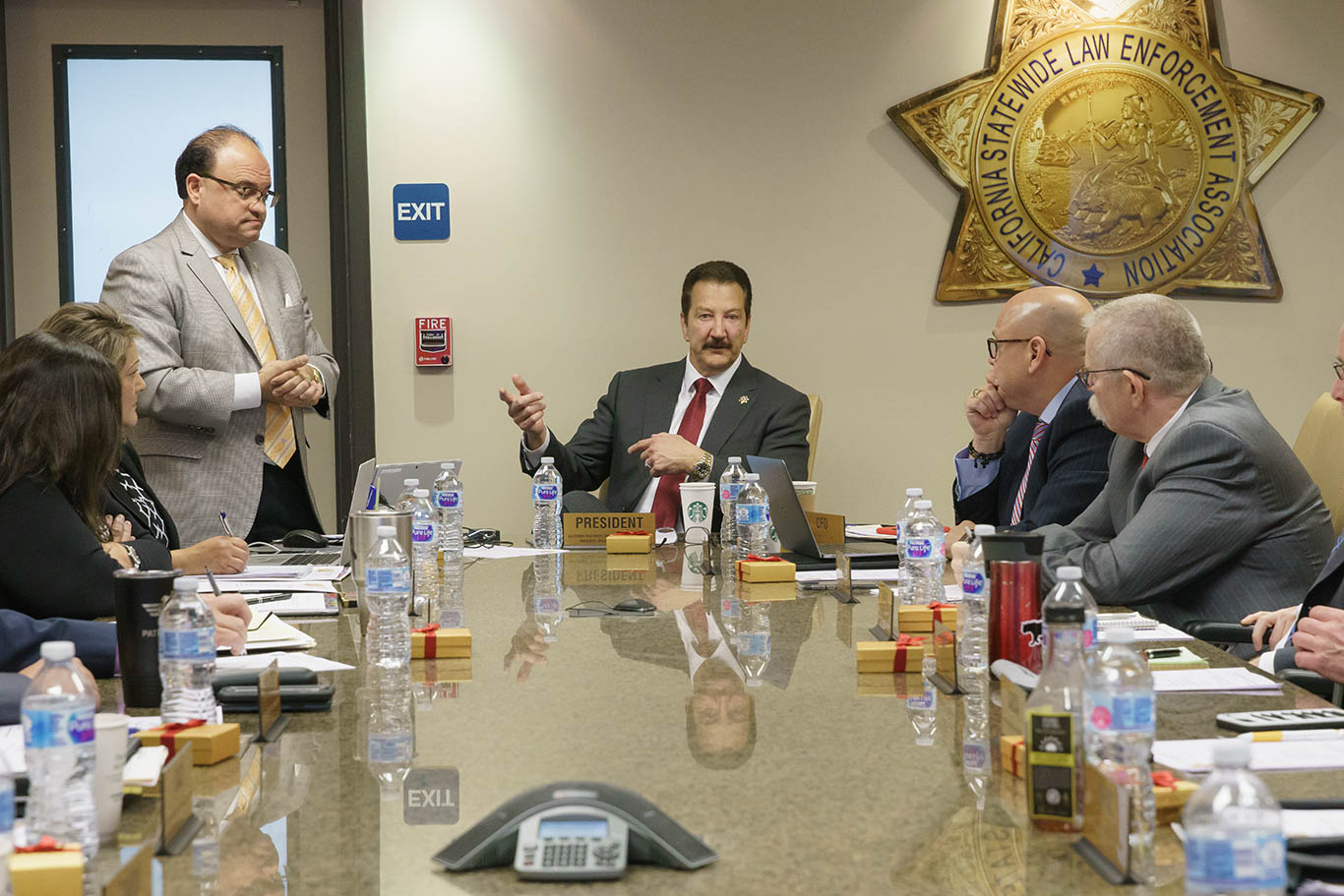 Always fighting for the rights of CSLEA members, CSLEA Chief Counsel Kasey Clark updated the board on the work and successes of the CSLEA legal team, including  a January court ruling  in favor of CSLEA and a Hospital Police Investigator-member.  Clark informed the board of new members on the CSLEA Legal Representation Committee, all of whom met earlier in the day to be briefed and to vote on grievance cases.

“CSLEA members have the greatest of protection with our CSLEA legal team,” said CSLEA Senior Vice President and CHP-Public Safety Dispatchers Association President Tina Brazil.  “No one ever thinks they are going to need representation with issues that arise with supervisors, but we, as union leaders, know different, situations  arise when you least expect them and even with employees that have outstanding performance.” 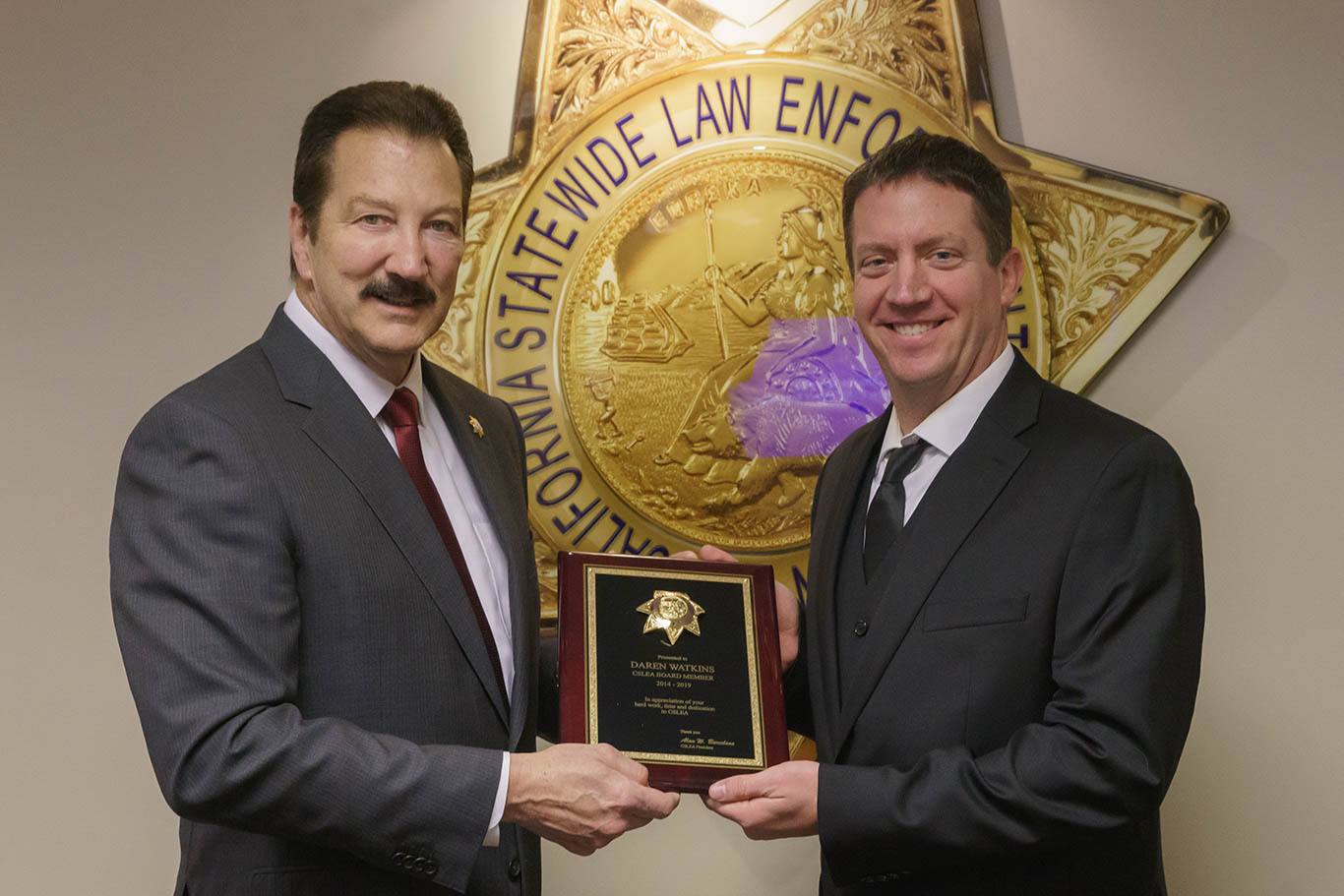 CSLEA President Alan Barcelona presented plaques of appreciation to two CSLEA directors who have served the board and CSLEA members for years and will no longer be acting directors.  In appreciation of former FMESA President Daren Watkins,  President Barcelona thanked Watkins for his five years of service on the CSLEA Board of Directors. “We wish you the best as you pursue your dreams of becoming a CHP officer. We are glad you are embarking upon the career you’ve always wanted.  You are a good person.” 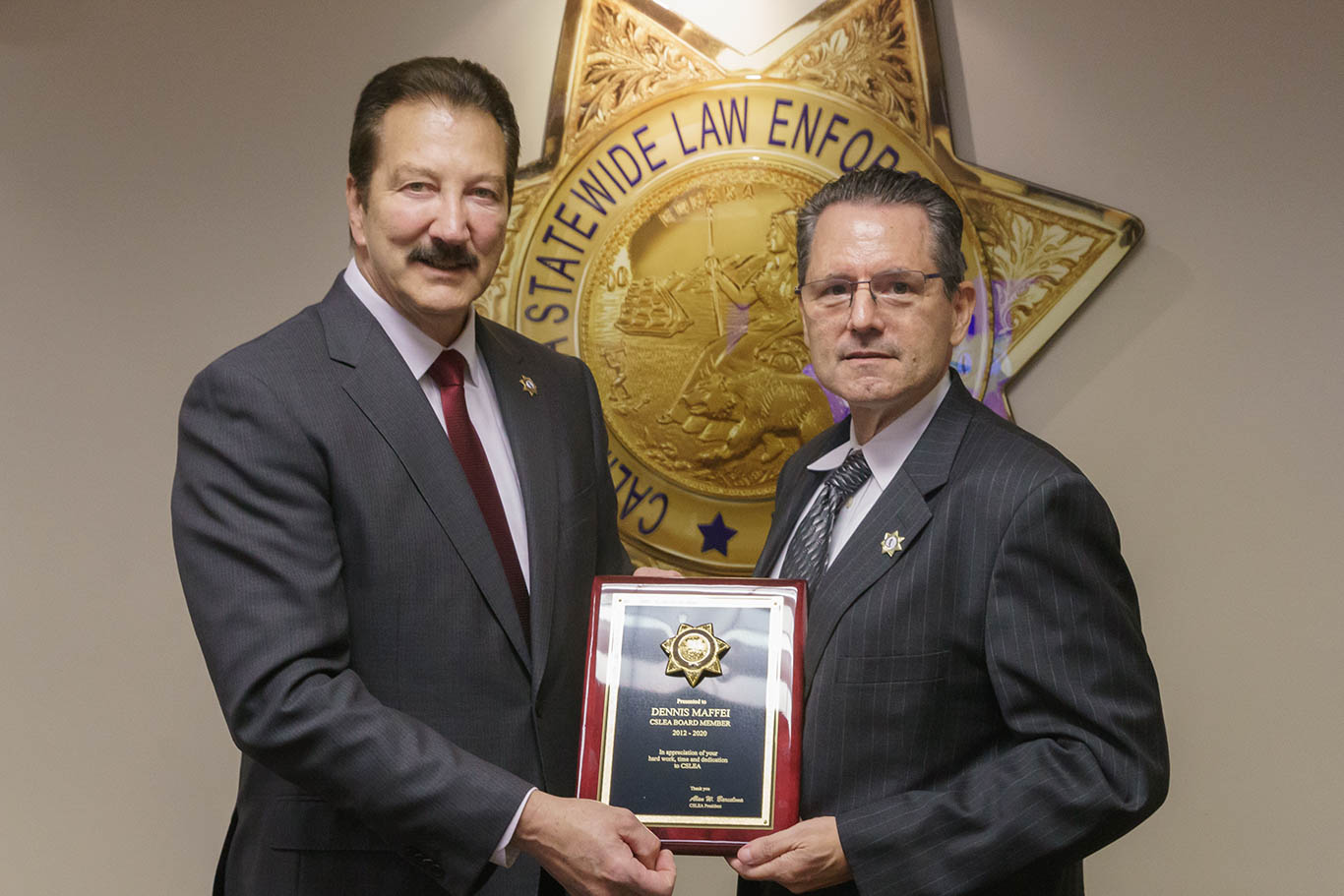 President Barcelona also presented a plaque to California Association of Criminal Investigators (CACI) President Dennis Maffei, thanking him for his eight years of service as a CSLEA director.  “We are sad to see you go, you have been a pillar for this board, a true believer in our members, a class act and someone who always put others first.” said Barcelona.

“During my time here, I had some issues going on, CSLEA President Alan Barcelona and CFO Ricardo Sanchez stood by me like the brotherhood that we have here at CSLEA.  We don’t do this for the money, we do it for others,” said Maffei.  Maffei also thanked CSLEA Unit-A Vice President Kenny Ehrman, Chief Counsel Kasey Clark, and Communications Director Teri Cox for their constant availability and assistance in serving as CACI President and CSLEA Director.  “I sometimes called Kasey daily, nights, weekends, whenever, he always picked up the phone or got right back to me.” 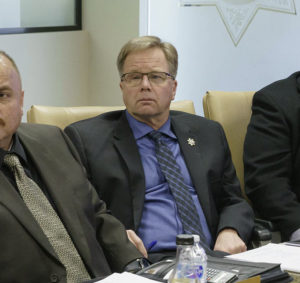 “CSLEA continues to battle to protect our pension and benefits from those who want to take what we have away,” said CSLEA Director and president of the Association of Conservationist Employees (ACE) Shawn Fry.  “Stay union strong and reach out to any non-member to them to join our ranks.” 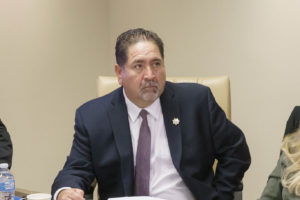 “I would personally encourage members to become more involved with our union,” said CSLEA Director and California Organization of Licensing Registration Examiners (COLRE) President Enrique Razo.  “Safety comes with greater membership.  Also, our jobs as LREs are very hazardous, it’s unfortunate that the department does not see it that way, but our union knows!” 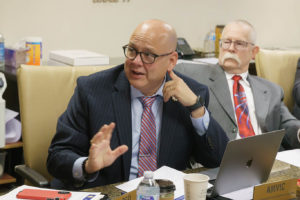 CSLEA Director and Foundation Chair Kenny Ehrman advised the Board that CSLEA would once again be offering scholarships this year and that applications would likely be made available in late February – early March.   “To review the applications of these remarkable kids makes the job of chairing the foundation very rewarding,” said Ehrman.

Chief Counsel Clark wrapped up the in-house meeting with a contract update, stating that CSLEA just recently received the current MOU from CalHR and it is currently being reviewed by CSLEA attorneys before it is given a green light to be placed on CalHR and CSLEA websites.   He advised directors that mid contract fixes are being identified, researched, reviewed and worked on.

“Following the world class contract, CSLEA is not resting,” said Director Maffei.  “CSLEA is continuing to address numerous issues which affect all, for us and our futures.”

“Members can be certain that CSLEA will not rest on the benefits of the ratified contract, as the future holds legislative and budget challenges that require our full attention and resources,” said CSLEA Director and Association of Deputy Commissioners (ADC) Marcus Nenn. 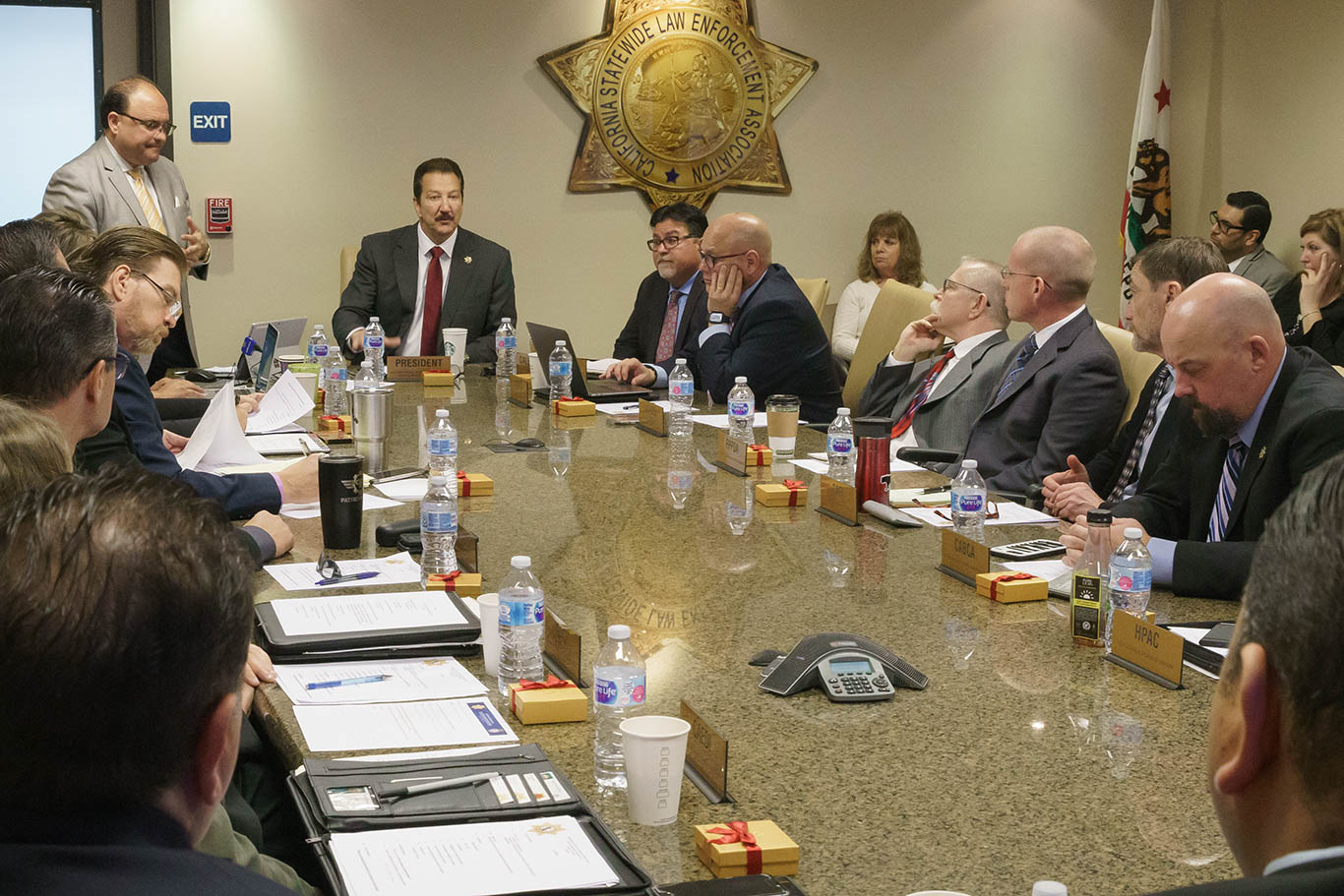 When CSLEA directors completed their items of business, there was one thing left on the agenda, a trip to the Capitol for a scheduled meeting with Governor Newsom.   The directors spent 30 minutes at a large conference table with the Governor speaking about concerning issues in California and as state employees.

“It was a pleasure meeting with the governor,” said CSLEA Director Miller.  “we had an opportunity to thank him for an outstanding contract.”

“Governor Newsom was so very gracious in inviting us to the Capitol to spend some time with him during his very busy day,” said CSLEA President Barcelona.  “He has a passion and love for California and believes in our great state and its future.  I thank him for his time and for being honest and open with our directors.”

To read more about the meeting with Governor Newsom, click here.